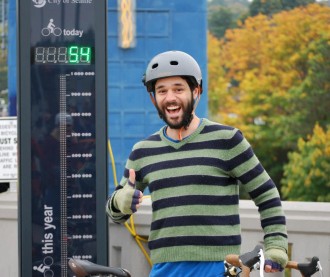 Yours truly posing on opening day for the Fremont bike counter. Photo by Anne-Marije Rook

Cascade Bicycle Club announced Tuesday that the Mark and Susan Torrance Foundation and the Rails to Trails Conservancy will help purchase seven new electronic bike counters, mostly place on trails around the city.

Not all the counters will include a display keeping a live-updated tally, like the ones on the Fremont and lower West Seattle bridges. But all will gather 24/7, real-time usage data that will help shine more light on people’s cycling habits and track trends.

“The more that we have information and data on the use of the city’s streets by bicyclists, the more we’ll be able to plan successfully and build successfully for a great bicycle system,” said Tom Rasmussen during the transportation committee hearing. “So these counters will help us a great deal.”

Benchmarked for 2014, the proposal calls for the following counters:

+ A combined bicycle and pedestrian counter on:
– the Mountains to Sound Trail near the I-90 Bridge
– the Elliott Bay Trail in or near Myrtle Edwards Park
– the Chief Sealth Trail
– the Burke-Gilman Trail (exact location TBD)

+ bicycle counters without a display on:
–  the Broadway Cycle Track
– along a neighborhood greenway (exact location TBD)

I wish the Broadway counter had a display, since I bet it would be the most visual counter in the city. But simply having the data would be great, too.

And with the West Seattle Bridge counter’s troubles making accurate counts, I hope that lessons are learned and those issues are avoided with the new counters.

Will we make 1 million Fremont Bridge bike trips in 2013? 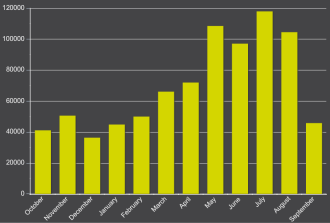 Meanwhile, it’s about time we checked in on Seattle’s attempt to reach one million bike trips across the Fremont Bridge in 2013.

The short version: It’s gonna take some real hustling to get there. We are likely on track to fall just barely short of the 1 million mark unless an unprecedented number of people continue cycling through the rainy late fall.

Let’s take a look at the math.

There are two good ways to measure how many bike trips across the bridge are made in a year: Measuring trips in the calendar year 2013 or measuring trips since the counter was activated October 11, 2012. In order to reach one million trips by October 11 (or, to be fair October 12 since the counter was turned on mid-day), people biking would need to cross the bridge 164,810 times in the next 25 days. This is very unlikely, since the busiest month on record so far was July with a remarkable 117,974 bikes trips across the bridge.

Trends suggest that we will probably fall about 75,000 trips short of one million on October 12. The counter will probably measure its 1 millionth trip sometime around Thanksgiving, still an impressive feat.

So, are we going to make it to one million trips in 2013? As of midnight, there have been 707,044 bike trips across the bridge since January 1. So we’re just over 70 percent of the way through the year, and we’re about 70 percent of the way to one million trips. That sounds promising, but there are a couple key problems. A: Bike trips are likely to be low during November and December and B: Since the biggest commute days are work days, bike trips plummet during the second half of December due to the holidays.

Seattle Bike Blog projections say we’ll probably fall about 75,000 trips short by that measure, as well. Compared to 1,000,000, a number like 75,000 seems so small. But that’s more trips than were measured in the entire month of November last year.

So unless one of y’all gets really bored and decides to ride circles around Fremont for a day or two, perhaps it’s time to start analyzing the data collected and see if we can identify some issues that can be addressed via programs, events and education efforts.

What ideas do you have? What do you see in the data collected that could help encouragement efforts?