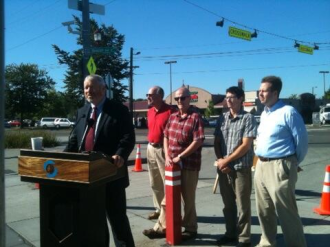 Mayor McGinn announced Wednesday nearly $14 million in additional neighborhood transportation investments as part of his proposed 2014 budget. The bulk of of the funds go toward what McGinn’s office calls “basics,” which means bridge rehab planning, new sidewalks, repaving of both arterial and residential streets and some added funds for biking and walking enhancements of large projects like Northgate Station and 23rd Ave.

While the plans announced Wednesday do not address funding the soon-to-be-completed Bicycle Master Plan, McGinn spokesperson Aaron Pickus said there will be an announcement about funding the bike plan “in the near future.”

They announced plans do include funds that could likely be leveraged in building neighborhood greenways, such as traffic calming, non-arterial street repaving and, of course, sidewalk work.

The city also announced recipients of the large Neighborhood Street Fund this week, which includes millions for sidewalks, crosswalks and other neighborhood street improvements. For example, this Duwamish Trial extension in South Park: 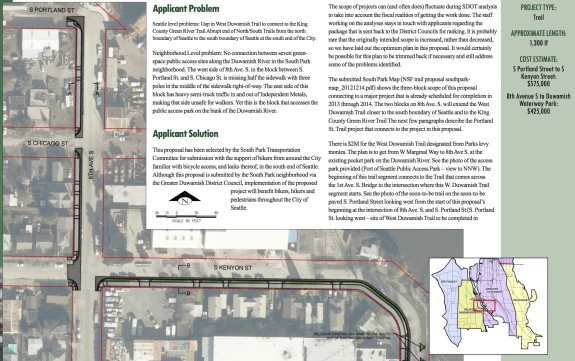 “Neighborhoods across Seattle are always in need of, and advocating for, more transportation investments,” said Phil Shack, chair of the City Neighborhood Council. “This commitment to invest more in our communities is much needed and very welcome.”

The mayor’s 2014 Proposed Budget represents a 37% increase in road maintenance funding over 2010 levels. A significant investment for people who walk is also part of this budget proposal. With more funding for pedestrian improvements like sidewalks and curb ramps, there is a 79% increase in Pedestrian Master Plan Implementation over the 2014 Endorsed Capital Improvement Program.

“Seattle’s Pedestrian Master Plan is the City’s guide to prioritized investments for people who walk,” said Devor Barton, chair of the Seattle Pedestrian Advisory Board. “This funding increase for plan implementation will make our streets safer, our neighborhood more walkable, and, eventually, it will make our residents healthier.”

$2,400,000 is also included to leverage state and federal grants to significantly improve the 23rd Avenue Corridor, a corridor running through the Central District and Capitol Hill. Improvements will include sidewalk reconstruction, pavement reconstruction, a neighborhood greenway, signal upgrades, and more.

Specific maintenance and infrastructure investments include:

The $13,976,000 in neighborhood transportation investments listed above are in addition to the City’s baseline budget for similar items and are made possible through Bridging the Gap dollars, real estate excise tax revenues, and other funding sources.

3 Responses to Mayor announces $14M in neighborhood transportation, sidewalks and neighborhood greenways could get boost