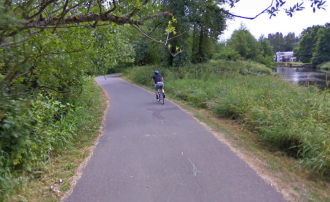 Keeping bumps caused by tree roots is a never-ending battle on the trail. Image via Google Street View

If you bike the Sammamish River Trail in Bothell, then I’ve got some great news for you just in from King County.

Say goodbye to root bumps in the westernmost couple miles of the trail. Starting after Labor Day, crews will fix the bumps and install preventative tree root barriers.

The work will require people on bikes to dismount and walk for sections. Some trees will also be removed as part of the project.

Users of King County Parks’ Sammamish River Trail through Bothell will soon experience a smoother walk, run or ride, thanks to a King County project to remove protruding roots and repave portions of the trail.

Beginning Sept. 3, crews will remove trees with roots that are coming up through the surface along portions of the westernmost 2-½-mile-long stretch of the trail. A new root barrier system will also be installed, and all areas where the work occurs will be repaved.

While the scope of work does not warrant the closing of the trail, users should expect delays of up to 15 minutes during tree removal activities. Bicycle users should be prepared to dismount and walk around the construction zone, as directed by flaggers.

Work is scheduled for Monday through Friday, from 7 a.m. to 5 p.m., and the project is expected to be wrapped up by the end of September. There will be no weekend work.

This entry was posted in news and tagged bothell, construction, sammamish river trail. Bookmark the permalink.