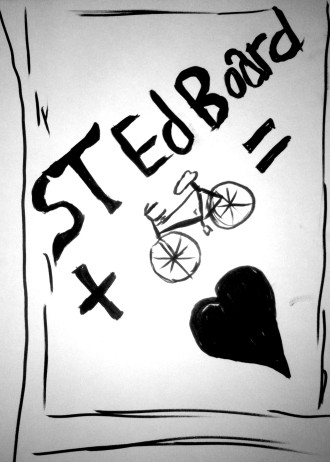 Confidential to SBB: A Times janitor found this scrawled hundreds of times in a notebook left in a conference room.

It’s turning into a true summer romance! The Seattle Times Editorial Board <3 Bikes!

We’ve been watching this year as the board, which has been critical or at least not supportive of bold bike investments in the past, has more and more seen bike infrastructure as vital for road safety and the city’s economic development. This trend culminated this week with a full-throated editorial in favor of cycle tracks and neighborhood greenways and a call for Seattle to be “in the vanguard” of bike infrastructure.

But they haven’t stopped there. Thursday, the board praised the City of Kirkland for pursuing a trail on their city’s section of the Eastside Rail Corridor. The somewhat controversial decision to tear out the existing and abandoned rails drew criticism from people who see the trail as dashing hopes for future commuter rail (and a very small handful of folks who wanted to see freight rail return to the neighborhood).

But the Times says the trail does not preclude future rail, and shows Kirkland’s dedication to providing multiple transportation choices:

The way is cleared for rail lines to come up in the 100-feet wide corridor and for the bike path to go down. This is all about transportation options. Kirkland city officials have made it clear they are looking forward to commuter rail service in the corridor. There is plenty of room for bikes and rail transit.

All joking aside, it is very exciting to have the Times Ed Board supporting cycling investments in the area. It’s one more sign that the conversation about cycling in Seattle has changed dramatically in recent years. Appeal for cycling is growing wider, and the Times is a news source that reaches far beyond Seattle’s most bike-friendly enclaves, both geographically and demographically.

Biking is a key part of the future of a growing Seattle. With the city government, popular opinion and now nearly every major media editorial board in agreement that the city needs to play catchup on cycling investments, what’s left standing in the way?

This entry was posted in news and tagged seattle times editorial board. Bookmark the permalink.