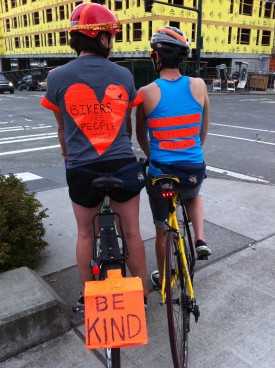 A man who allegedly struck and injured a person making deliveries for Jimmy John’s in the U District has been charged with felony hit and run, KIRO TV reports.

The collision occurred on the Ave at Campus Parkway, the same intersection where Robert Townsend died in a 2011 collision while delivering for Jimmy John’s.

Malcolm Beaver, 20, was driving southbound on the Ave as the victim was biking north in the bike lane. Beaver made a left and turned into the victim and struck him. Beaver did not stop and instead accelerated from the scene, turned right on 15th and fled, according to court documents.

The victim was left with serious injuries, the worst being a knee fracture that required surgery.

Police located Beaver in his Jeep Cherokee a couple days later, and he admitted to the officer that he had hit the victim while turning and then fled the scene. He told the officer that he panicked after the collision because he did not have a driver’s license or insurance.

He also told the officer that he felt bad about what happened and wanted to get it off his conscience, according to court documents.

Beyond the case against Beaver, the incident brings up issues of bike safety on the Ave. As this is at least the second time someone biking has been injured by left turns at this intersection in recent memory (both times, the people driving said they didn’t see the person biking), it’s past time for they city to look at what can be done to increase safety here and at other tricky Campus Parkway intersections.