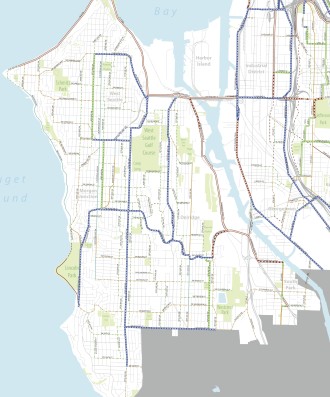 The plan for West Seattle has not changed much from the first draft (so we don’t have a whole lot more to add).

As we noted in our first look at plans for the neighborhood, because of West Seattle’s geography and disconnected street grid, there are not a whole lot of options for safe bike and connected bike routes in West Seattle that don’t involve protected bike lanes on busy streets. Which is exactly what the plan calls for.

Connections to bridges and ferries is also still a key focus of the plan, which is smart for a neighborhood that has few points of access to other parts of the city and region.

There is probably an opportunity for a neighborhood greenway connection north of Fauntleroy in the 36th/37th Ave SW area.

There needs to be a connection of some kind between Airport Way/Lucile where the Beacon Hill Neighborhood Greenway starts to the west side of Georgetown Playfield. Corson Ave S is pretty miserable today, but there seems like there much be a good connection option either on-street or through the playfield in some way (trail?).

The plans for connecting to Concord International School are good, and could easily plug into a neighborhood greenway route on the east side of 99. 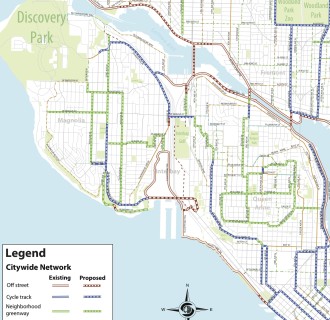 Let’s start at the Ballard Locks. For one, it is missing from the map. While there is likely very little the plan can actually do about the design of the walkways through the Locks, I think it is definitely worth noting a desire for the walkway to be a 24-hour crossing. Obviously, this involves negotiating with the Army Corps of Engineers, but it’s a worthy goal to keep working towards.

W Commodore Way in front of the Locks entrance could also use a bike facility of some kind.

The plan still includes a bikeway of some kind over the Ballard Bridge, but it also includes a crossing at 3rd Ave NW. This is a possible location for a new Ship Canal Crossing tied to in-process plans for high speed transit to Ballard.

Let’s not forget about the Aurora Bridge. Some relatively small investments (especially on the exit on Queen Anne connecting to Raye St) could go a long way to increasing connectivity and safety between Queen Anne/Top of Dexter to upper Fremont and Wallingford. Today, it’s already way safer than the Ballard Bridge (though, of course, that’s a really low bar).

Some people might argue with me here, but I think a climbing lane up the counterbalance on Queen Anne Ave would be awesome. It’s a damn hard hill, but also pretty cool if you can make it. The plan includes so few options up Queen Anne, that it might as well embrace the idea that some people will go ahead and just try taking the most direct route (how cool would it be to have a bike route sign at Queen Anne Ave/Roy that says: “^ The Hard Way. > The Easier Way.”

Any other notes to add about these areas? Let us know in the comments below.