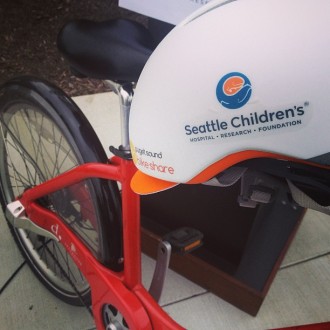 Seattle Children’s Hospital has stepped up to be the first big sponsor of Puget Sound Bike Share, announcing a $500,000 grant Monday (actually, it will be announced at an 11 a.m. press event at the hospital).

The grant is just the latest effort from a health care organization that has proven it understands the importance of health care outside as well as inside their institution’s walls. This year also saw the completion of the 39th Ave NE neighborhood greenway connecting Wedgwood to the Burke-Gilman Trail, passing the expanding Seattle Children’s campus. The hospital paid for the greenway as part of a transportation mitigation plan, but also because it takes the health of its employees seriously and wants to make it as easy as possible for them to bike or walk to their jobs.

The grant will mostly cover the cost of the expensive helmet vending solutions required for the system due to King County’s rare helmet law for adults. Seattle Children’s is a strong supporter of helmets for children, paying for many free children’s helmet giveaways throughout the year (see here for upcoming events).

Puget Sound Bike Share still needs more big sponsors to step up. Sponsoring bike share systems has proven to be a huge boon for businesses around the world. For example, a recent study from New York show that after just a couple months of operation, Citibike has dramatically improved people’s opinions of the reviled (for good reason) Citibank. Just imagine what bike share could do for a brand that isn’t evil!

Interested sponsors of all levels should get in touch with PSBS Director Holly Houser.

We reported recently on Puget Sound Bike Share’s funding progress (and the solid deal the city and county are posed to get on the system). With half the launch costs in the bank from Federal and state grants, the organization is actively courting sponsors.

And no name-sponsoring company has been announced yet, so there may still be time for a company to bring the system home and win naming rights. A Slog poll crowd-testing some of our naming suggestions found overwhelming support for “Starbikes,” but there was good support for Amazooms and XBikes, as well…

More details on the Seattle Children’s sponsorship, from a press release:

Seattle Children’s Hospital today announced a $500,000 grant to Puget Sound Bike Share. The grant will provide adult helmets at future bike-share stations in the Seattle area. Seattle Children’s is the first major Seattle-area employer to invest in the program, which has received $1.75 million in state and federal grants.

“We are dedicated to supporting a healthy workforce and helping our employees find commute alternatives,” said Lisa Brandenburg, president of Seattle Children’s Hospital. “Less than 40 percent of our employees drive to work alone. Bike sharing will be another great option our employees can use to get around the city.”

Puget Sound Bike Share is a nonprofit working with the support of local government agencies to bring a bike-sharing system to the Seattle area. The first phase of the program, scheduled to launch in spring 2014, will include 50 bike-share stations and 500 bikes near Seattle’s most popular urban destinations.

“Bike share will be a success in King County because of generous and visionary community partners like Seattle Children’s Hospital,” said Holly Houser, executive director of Puget Sound Bike Share.

The grant is part of Seattle Children’s overall commitment to providing sustainable alternate commute options for the Puget Sound region. As part of the hospital’s 20-year master plan, Seattle Children’s has already committed nearly $4 million for neighborhood transportation improvements, including a cycle track along Sand Point Way NE and a new connection between the Burke-Gilman Trail and Sand Point Way NE.

“Seattle’s bike-share network will help provide a new option for people to get around, supporting health, safety and vibrant communities,” said Seattle Mayor Mike McGinn. “This program is a partnership with the private sector, and we hope other institutions in our community will step forward to match Seattle Children’s investment.”

“As we know from other cities, bike share dramatically increases the number of people who ride and once someone tries bike share they tend to use it frequently for all kinds of short trips,” said City Council Transportation Chair Tom Rasmussen. “Studies have shown that even just a few short bike rides a week is enough to burn off an average of 11 pounds a year and reduce mortality rate by 39 percent. So, thank you, Seattle Children’s, for making Seattle a healthier place to live.”