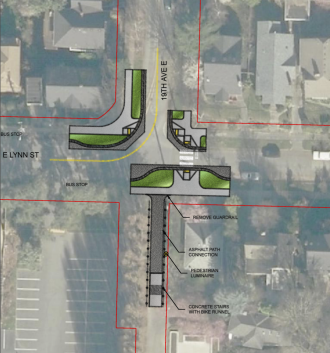 If you have ever tried to get to Interlaken Drive from the Bill Dawson Trail under 520 near the Montlake Bridge, then you have probably gotten completely lost trying to find a way through the neighborhood streets. Turns out, your best option is to cut through the St. Demetrios Church parking lot.

Well, if the gate is open, anyway.

Obviously, cutting through a parking lot that is only sometimes open is not an acceptable transportation solution for any party involved (including the church). So a Montlake Greenways proposal under consideration for a large Neighborhood Street Fund grant would pave an existing dirt path and remove a guard rail so people walking and biking could bypass the church.

There is a hiccup in the plan, though. SDOT has determined that a fully bikeable and ADA accessible trail would be too steep (approximately 10 feet of rise over 100 feet), and have instead suggested a section of stairs with a runnel for bikes. That’s certainly less exciting and could take some wind out of the project’s sails unless a ramp solution can be figured out (the grade of the trail would probably still be less than climbing the nearby parking lot’s hills).

If a non-stair solution can be figured out, this would be a great project for the neighborhood (it’s a Safe Routes to School project, as well) and as a transportation project (if you can handle the steep block of 19th between Lynn and Interlaken, then it’s a great short cut to Capitol Hill and the Central District).

More details on the project: