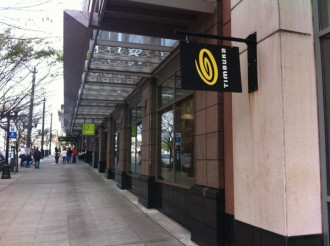 This week, they are expanding the bikey presence in downtown by launching a free store-based mini bike share.

Visitors can borrow one of their three bikes (comes with lock, helmet and, of course, a Timbuk 2 bag to carry your stuff) so they can have a chance to see the city from behind the handlebars, which is obviously the best way to see it.

Obviously, this isn’t “bike share” the way Puget Sound Bike Share will be. But it’s an interesting service for a retail operation to offer. Many hotels in the city offer bikes for free or a small fee to visitors, but this is the first I’ve heard of a retail store operating such a service. Seems like a smart way to become a destination and hub of somebody’s Seattle experience. Has anyone heard of another business doing this?

Details on the program from a Timbuk2 press release:

Timbuk2, the original San Francisco bag company and longtime bike commuting advocate, will launch a complimentary Bike Share Program at its Seattle retail store on Thursday, June 27. Located in the heart of downtown Seattle, the Timbuk2 retail store will offer three complimentary Giant Seek O bikes to guests and travelers seeking a fun and green means of transportation to traverse the city. Offered during retail store hours, patrons simply fill out a registration form to access a bike and the appropriate corresponding gear. The Timbuk2 Bike Share Program includes:

The Seattle program marks Timbuk2’s second foray into bike sharing, as the company implemented one of San Francisco’s first bike share programs at its flagship retail store in 2011. Both programs reflect the company’s commitment to promoting the positive benefits of cycling on individuals, communities and the environment.