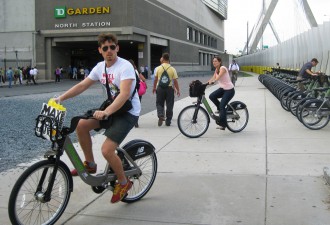 After years of conflicting studies have thrown its results into question, both the Center for Disease Control and the National Highway Traffic Safety Administration will no longer promote the conclusion that bicycle helmets reduce head injury rates by 85 percent in light of meta-analyses of similar studies that found lower and inconclusive results.

The often-cited and influential 1989 study was conducted in Seattle by Robert Thompson M.D. for Group Health. It has been heavily influential in discussions about municipal all-ages bicycle helmet laws. Not surprisingly, King County is among the only major metropolitan areas on the planet to have such a law. After all, if you could reduce head injuries by 85 percent just by wearing a helmet, then of course we should make them mandatory!

However, subsequent studies have not been able to repeat the 85 percent figure found in the Seattle study. Results vary, but have consistently been lower. After urging from the Washington Area Bicyclist Association in DC, the CDC and NHTSA will no longer be promoting the 85 percent conclusion.

Bicycle helmets and helmet laws are incredibly controversial and divisive. Navigating all the conflicting and sometimes untrustworthy studies on either side of the debate can drive you crazy. Elly Blue wrote an excellent story for Grist looking at tons of studies and arguments about helmets out there and concluded that, at best, support for or against helmet promotion and laws is inconclusive. Her conclusion: “The great helmet question is the wrong one entirely to be asking.”

The biggest problem with a study that only looks at people who have been in a serious bicycle collision or accident is that it does not take into account other much more important bike safety factors, such as those that prevent collisions from happening in the first place. The single most important one: Safety in Numbers.

It is indisputable that the more people biking in a city, the lower the collision rate. This has been conclusively shown in cities all across the globe including Seattle.

It is also indisputable that bike share is extremely safe, perhaps the safest way to get around in an urban environment. Systems in cities from London to Dublin to Minneapolis have found that the rate of serious injuries or deaths on bike share bikes are very low. In fact, people using a bike share have significantly lower injury rates than people riding their own bikes (there are likely many reasons for this, including higher safety in numbers in bike share areas, bikes share bikes being designed to go slower, lower likelihood for extreme riding like BMX, road race training or mountain biking, etc).

And there’s the rub.

There are serious concerns that King County’s all-ages helmet law could have a negative impact on use of the upcoming Puget Sound Bike Share system. Bike share is dependent on people choosing spontaneously to use the system for a short trip here or there. But it is very unlikely that many potential users will carry a helmet with them at all times. PSBS and vendor-operator Alta Bike Share have plans for a helmet vending solution, but this has not yet been successfully implemented anywhere in the world and will add cost to the system and individual users. This cost and reduced ridership due to the helmet law was factored into the system’s plan.

I do not actually care a whole lot about the helmet debate outside of the context of bike share. I choose to wear a helmet, and while I am not a supporter of helmet laws, it’s really not that hard to keep a helmet with your personal bike. There are much more important bike safety issues facing Seattle, like investing in safe bike facilities and encouraging the use of bike lights at night.

But bike share could revolutionize the way Seattle gets around. Our city is perfectly set up for it, with express transit routes moving people into urban centers where people are often dropped off within a short bike ride to their destinations.

That’s why the city/county should modify the bike helmet law for adults (not children). There is very little political will to repeal the law, but there is room for a compromise: Make it a secondary offense (or maybe even make it a secondary offense for bike share users only). Adults who are biking safely and obeying all traffic laws are not a public safety hazard, either to themselves or others. The city should support the success and safety of bike share by doing what they can to encourage the highest use of the system possible. Again: Safety in numbers is 100 percent certain to lower the collision rate for people on bikes.

The compromise here is that people who are not obeying traffic laws and are biking dangerously would get double-ticketed if they do so without a helmet on. So this law change would put an extra emphasis on lawful, safe riding while also allowing bike share to flourish. That’s a politically-palatable win-win that I think most people can agree on.