Loper: What’s next after a record Bike to School Day? 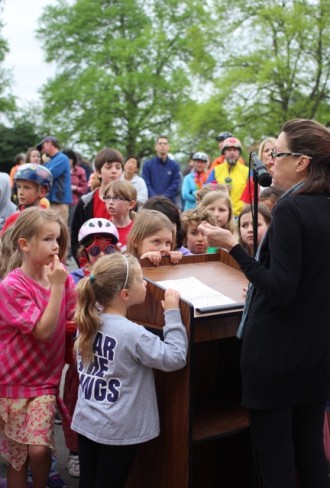 This past Wednesday, Seattle’s first ever Bike to School Day rally attracted VIPs from the school district and city, as well as media including Seattle Bike Blog.

Seattle Public Schools superintendent Jose Banda, School Board Member Kay Smith-Blum, and Seattle Councilmember Sally Bagshaw all attended. Speaking at the rally, these civic leaders each reminded us why active transportation is so important for our kids.

While the cameras were rolling in NE Seattle, families around the city were participating in bike to school events at their local schools too.  Many of these events also set records, with more Seattle kids riding to school last Wednesday than probably any day since the beginning of safe routes to school programs to reinvigorate active transportation.

Nationally, the percentage of children walking and bicycling to school has plummeted from nearly 50 percent in 1969 to about 13 percent today. A decade of observation of the Seattle school transportation scene suggests that we aren’t much different here. With 50,000 students attending Seattle public schools and many more enrolled in private schools across this city, the potential benefits from widespread change in transportation habits are astonishing.

Some have expressed surprise that it takes so much parent involvement to get kids walking and biking to school again. But to create such a widespread change in behavior requires a lot of effort. The unfortunate reality is that driving to school is the norm, even for short commutes. In fact, the Safe Routes to School National Partnership notes that driving even accounts for about half of school trips between 1/4- and 1/2-mile long, certainly an easy walking or biking distance for most.

Yet these school transportation habits are beginning to change. For organizers throughout the city, the excitement last Wednesday was palpable. Many spent a rewarding morning at their local school, where more kids and families were riding than ever before. Then over the course of the day, they were privy to news updates from schools around Seattle, with each update documenting another milestone. 115 kid bikers at one school. 175 at another. A couple dozen student commuters at each of several middle schools (most of the bike to school action so far has been at the elementary school level). Thousands of Seattle kids rode their bikes to school on Bike to School Day.

The stories were inspiring too. At Eckstein Middle School, as a new rider left the after-school biking celebration, she was asked if she’d be interested in more bike to school events. “Anything to do with biking, any time, I’ll be there!” was her response. Sounds like a vote for active transportation. 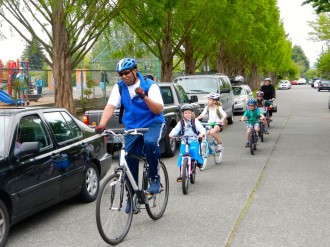 At Lincoln elementary, where over 60 students from a wide geographic area rode to school, one kid rode 10 miles to get there that morning!

And at Loyal Heights Elementary, the school’s principal led a bike train… talk about shifting transportation culture at a school!

So more kids are riding. They are having a great time doing it. And for the first time in memory, the leadership at the city and the school district seem to be focused on getting more kids biking and walking too. What next?

First, it’s not even the middle of May yet. So a lot more kid-powered bike commuting is in store before the end of Bike Month and the last day of the school year.

And in the bigger picture, the many efforts that blossomed on Bike to School Day are just a starting point. So far the increase in active transportation to our schools has been largely fueled by grassroots parents efforts with some support from Cascade, Bike Alliance, and Feet First, as well as some helpful grant funding from Seattle Department of Transportation. But lasting change also will require stronger leadership from school administrators and Seattle elected officials.

Seattle seems to be taking these needs seriously. In addition to the aforementioned grant program, they also have been building some  infrastructure projects to support Safe Routes to School. The Bicycle Master Plan update seems poised to increase the city’s emphasis on neighborhood street improvements, many of which will improve school commutes. And the city also has recently announced the formation of a task force to recommend road safety improvements near schools.

Much of this is still in the early planning phase, and a wealth of great ideas likely will be generated. Let’s hope that Seattle has the political will and allocates the funding to implement them.

The school district and leadership at the many Seattle private schools need to get on board as well. They can provide bike parking, incentives for staff to ride, and clear overarching direction for principals and other school administrators to prioritize and promote active transportation.

Two weeks ago, the District’s transportation office directed all Seattle Schools principals to encourage their students and families to bike to school “on May 8 and beyond.” The message included a statement of support from Superintendent Jose Banda. The superintendent is a cyclist and his involvement in last week’s Bike to School Day — in his first year on the job — was promising. Kay Smith-Blum is a supportive voice on the school board. There is reason to be optimistic.

Hopefully this year’s bike to school efforts can launch real change toward a sustainable transportation culture at our schools. School kids are commuters too, and their transportation habits deserve equal footing in public policy and advocacy discussions with the transportation choices of those of us who travel to work each day.

7 Responses to Loper: What’s next after a record Bike to School Day?