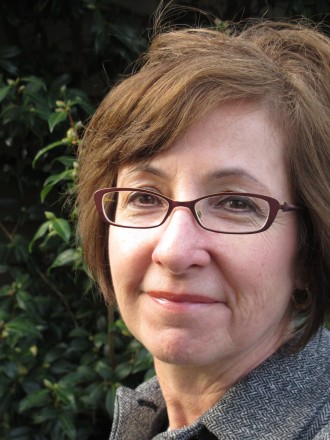 Kate Martin may be way behind in the money game, but she thinks the other Seattle mayoral challengers are ignoring too many people.

“They’re all going for the same voters,” Martin told Seattle Bike Blog during a recent chat at a coffee shop in her Greenwood neighborhood.

The only woman in the 2013 race (side note: WTF Seattle?), Martin sees small businesses, moms and young voters as up for grabs, and is pushing a combination of business, industry and family-based priorities.

So what about bikes? Well, Martin was the only candidate who responded to our recent post: Looking to stand out from the mayoral pack? Challenge McGinn with a bike-friendly vision. On the heels of a completely lackluster and uninspiring transportation platform from Tim Burgess, the post questioned whether the mayoral challenger field was going to just let Mayor Mike McGinn own the issue of inspiring and bold support for biking, walking and transit. Seattle Transit Blog followed-up on our post with one of their own, asking a similar question.

Cascade Bicycle Club Thursday announced an early endorsement of Mayor Mike McGinn (though Martin claims via Facebook that the club never gave her the chance for an interview or even complete a questionnaire). Seattle Bike Blog has not officially endorsed a candidate in the race and, like most other news outlets, will wait until closer to the election to make one. However, we will say that, as we noted above, McGinn is clearly the candidate to beat on transportation.

Martin’s transportation views are certainly not run-of-the-mill. A strong supporter of building sidewalks in neighborhoods without them, Martin has also taken to neighborhood greenways as a way to increase walking and biking safety and access.

Though she describes herself as “timid” on a bike (“I’ll ride on the sidewalk down to Bartell’s”), and she sees neighborhood greenways as a way to appeal to people who are too timid to bike on the streets today, like herself, and for people of all ages.

“I think greenways fit really well with family habitat and youth habitat,” she said. I asked her whether she supports changes to road space, like road diets and traffic diverting islands that have at times been controversial in recent years.

“We’ve changed the way we use roads quite a bit, and I think we’ll continue to do that,” she said. She thinks people need to move past the idea that “street parking is free car storage” and is a strong supporter of diverters like the one that was recently cut from Ballard’s planned NW 58th St greenway project.

However, she also said she has concerns about removing so much parking near small businesses that it could hurt them.

Since so many transportation projects—especially safety-oriented ones—fail to get adequate funding, I asked her about her opinion on the next version of Bridging the Gap, which will come up during the next mayor’s time in office. The problem with BTG, she said, is that the city has stopped adequately funding maintenance from the budget, essentially using BTG to pay for projects that should have been budgeted, anyway. While the levy was supposed to give the city a jump start on catching up to the maintenance backlog, it has not done much, she claims.

“The city is putting us further behind by not budgeting in real time for maintenance,” she said, noting that sidewalk maintenance gets a particularly pitiful percentage of general budget funding.

She sees congestion as an impediment to doing business and said it “slows everything down and makes things more expensive than they need to be.” Congestion pricing should be considered as a solution to chronically congested streets, she said, because congestion means “we don’t have it priced right.” (Congestion pricing involves using tolls to maintain traffic flow. For more on congestion pricing, see this StreetFilms video)

For transit, she said having a way to get buses through congestion should be a priority in our streets. She was very critical of King County Metro (and the county government in general) and said fixing the bus agency should be the top transit priority.

“I think the King County government is not here for the long haul,” she said, saying much of what it does is redundant. “They’re doing a terrible job running the bus system … [and] we need a bus system that makes sense for Seattle.”

As for streetcars, she sees them as valuable for economic development, and said she is “excited” about the Eastlake-University District line (though she is less excited about the Ballard-bound idea).

She was also critical of light rail to Ballard, which she said would have little room to expand beyond the Ballard commercial core.

One area where she would likely clash with many cycling and safe streets proponents concerns industrial roads.

“I’m very protective of the industrial land,” she said. We chatted a bit about the endless legal battle over the Burke-Gilman Missing Link through Ballard, and she was not supportive of the city’s plans, which would build a trail on city-owned right-of-way that runs past several industrial driveways.

“Let’s do win-win stuff, not win-lose stuff,” she said. We have written many times about the Missing Link, which should have been completed years ago. “I’m for improving things for all the users in the right-of-way. I don’t want to be pitting one against the other.”

But, of course, sometimes tough decisions need to be made. And while she is very protective of industrial interests (“If we don’t have blue collar jobs, we have poverty”), she is less protective of space for people driving alone.

“If anyone is going to lose, which they are, the loser’s going to be the single-occupancy vehicle,” she said.

This entry was posted in news and tagged 2013 mayoral race, kate martin. Bookmark the permalink.

4 Responses to A chat with mayoral candidate Kate Martin