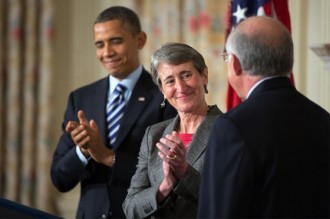 Image from Jewell’s nomination (via WhiteHouse.gov)

The US Senate has confirmed Seattle’s Sally Jewell as the new Interior Secretary, replacing Ken Salazar.

Most news reports about Sally Jewell refer to her as the CEO of REI, but did you know she was also a founding board member and president of the Mountains to Sound Greenway Trust?

From the MTS blog:

“Sally Jewell is a respected leader and passionate advocate for conservation, recreation and outdoor education,” says Cynthia Welti, Greenway Trust Executive Director. “We are delighted with this news. Sally will serve our country well.”

UPDATE: More details on her tenure at MTS, from an email: “Sally was a founding member and served for 22 years on the Mountains to Sound Greenway Trust Board of Directors, and as President from 2001-2004.”

The MTS Greenway Trust oversees a corridor of green spaces roughly following the I-90 corridor. Though still missing many key segments, the I-90 Trail (also known as the MTS Greenway) is a key component of that vision.

Beyond the MTS, Jewell’s experience as CEO of REI has created quite a stir among bicycling groups and writers nation-wide. REI is a massive bike retailer and repair shop both here in Seattle and in cities across the country, so hopes are high that Jewell’s leadership will look kindly on bicycle access and travel in our nation’s public spaces and parks.