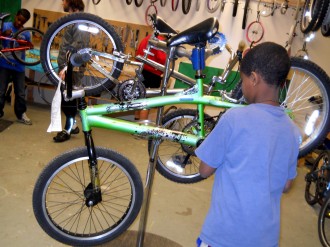 Having been involved in bike-to-school programs in North Seattle, I’m keenly aware of the challenges of promoting and supporting kids in riding their bikes to school. Even in a part of Seattle with involved parents and a high percentage of adult bike commuters, starting and growing a bike to school program can be daunting.

Aki Kurose Middle School in the Rainier Valley is one of the most racially and culturally diverse in Seattle’s public school system. At Aki, over 90 percent of the student population is black, Asian, or Hispanic. Many students speak English as a second language. I can only imagine how the challenges of bike-to-school organizing become amplified when working within a school with such a diversity of languages and cultural backgrounds.

In addition, helping middle schoolers travel by bike is more difficult than at the elementary level. As kids reach middle school, they gain independence and have the potential to safely commute to school on their own. The geographic area that a middle school draws kids from is large enough that biking can be a great option. But a large geographic area typically includes challenging arterials and other “trouble spots,” and if kids aren’t already confident and competent bike riders, helping them get started at that age is a particular challenge. Even more so in the Rainier Valley, which also suffers from sub-par bike infrastructure.

I first learned of a Seattle Department of Transportation project to encourage biking to Aki Kurose last fall as it was getting underway. I had a chance to check back in with SDOT recently to hear how things went this past fall and winter.

SDOT’s approach to working with Aki Kurose was refreshingly hands-on. Laura Ruchinskas — an Americorps intern — worked directly with the school. In partnership with Bike Works, she was able to invest enough time to establish a consistent presence there, which no doubt increased the odds of motivating kids to consider new transportation habits.

If you have ever ridden along the popular bike routes to Seward Park, you’ve likely ridden within a mile or so of Aki Kurose. However, Laura said biking to school was rare before the program began.

“Prior to October, only a few students rode a bicycle to school, and there was no visible bike culture,” she said. She admitted that it was a bit daunting to get things started and recruit students to participate.

Last October, Laura created a campaign within the school to encourage students to bike, walk, or take public transit to school. This broad focus had the advantage of providing incentives for all sustainable forms of transportation. Once a week, students would receive raffle tickets, coupons for hot drinks, and other incentives for walking, biking, or taking transit. This culminated in several raffle drawings, so that kids who traveled under their own power could earn prizes, including two new bikes donated by Raleigh.

One major highlight of Aki’s bike to school program was an after-school bike club. This created a great opportunity to work closely with some highly interested students, and to immerse them in bike culture. The club met after school for six weeks, and the kids learned everything from basic bike maintenance skills to route finding and safe riding techniques. Given its hands-on nature, the club had only six spots available. It turned out forty kids were interested! No wonder; the two Raleigh prize bikes were displayed for a while in the front hallway of the school. It sounds like there is a potential bike culture emerging at Aki.

Over the winter, another four students had an after-school bike club opportunity, this time with a chance to earn a BMX bike they built themselves.

“At the end of the course, each student walked away with confidence, skills, and a new ride,” said Laura.

Do more kids ride to school at Aki Kurose now? It’s probably too early to tell, though SDOT does plan a follow-up survey to track any changes in commute modes.

I’ve seen some interesting articles recently — like this MLK Day post by Adonia Lugo — about the need to consider diversity and equity in our transportation decisions. To create a city where biking (and walking) are the go-to modes of travel for more of us, we’ll need to invest in all of Seattle’s communities. Engineering improvements alone won’t be enough. We’ll also need education and encouragement programs to support kids and adults in adopting new habits and becoming more comfortable on the road.

It’s promising that the draft Bicycle Master Plan will include a goal to promote equity in our cycling investments; that should help ensure that policy and funding decisions reflect the diversity of needs around our city. It’s promising too, to see a goal like that put into action at Aki Kurose!